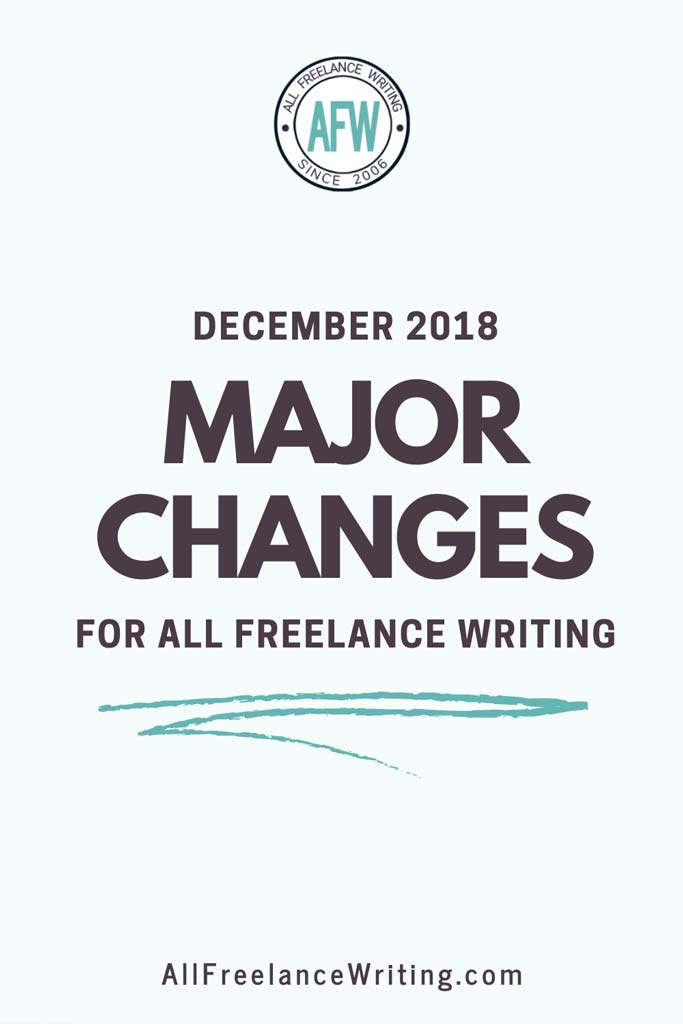 I haven't blogged much here this year. That's no secret. Neither was my reason for needing time away from this site -- I talked about it in-depth back in May during Lori Widmer's Writers' Worth Month. At the time, I thought I'd need a few months, and then I'd be able and willing to get things back to normal.

That didn't happen though. What I thought would feel better with time has instead gotten progressively worse.

I said in the spring I wasn't going to shut down the site or sell it. And that was put to the test over the summer when I was contacted by an interested buyer. Ultimately, I decided then not to let the site go... not to lose something else as a result of the hell of the past couple of years. I've lost enough.

But that opportunity did make me think much harder about what All Freelance Writing was going to look like if I didn't walk away completely when it's not something that can be a part of my daily life anymore. And I've made some decisions in the past several weeks that I think will be best all-around. I'd like to share those plans with you -- what I've recently changed, and what's still to come in the New Year.

For years now, I've been fed up with people referring to All Freelance Writing as just a "blog" when its blog was a relatively small part of the site. It was a collection of resources -- tools, templates, a job board, a market directory, a podcast, e-books, and then yes, the blog.

Blogging is one of the most regular and time-consuming aspects of the site, and the part that I most want (no, need) to distance myself from. I've been telling myself for far too long that I'll get back to it regularly. But I've come to accept that I simply don't want to. All that time here is too much of a reminder of things I desperately wish I could forget.

So, the "blog" portion of All Freelance Writing is no more.

You'll notice the blog link in the navigation is already removed. The archives will remain, and you can find them in the article archives ("Articles" link in the main navigation now). I've created a new article directory page that features some new categories and hand-picked featured articles from each of them, followed by links where you can read similar archived content.

Part of this has to do with the things I shared on Lori's blog last May. But there's more to it...

There are over 1800 posts on this blog, and that's after many were cut in past site changes. Frankly, if there's something beginners need to know, it's already here. And I don't want to waste my time, or yours, being one of those bloggers who keeps parroting the same old crap to appeal to the few folks who are too lazy to search. Instead, I'd rather make it easier for you to find what's here.

That said, there will still be some new content, especially between now and the end of the year. For example:

You'll still be notified of that new content if you subscribe to the site's RSS feed or if you're subscribed via email. I'll also be adding a few sections to the article directory page including one near the top for the latest update, so you'll still see the newest material there. I expect to have that finished this week along with some technical fixes brought to my attention by a reader recently.

So, that's that. The blog is dead. The content is not. And while I'll be taking a broader blogging break (other than smaller ones I keep my name off of), I will be blogging about freelance writing more regularly again in the future. It just won't be here. And it won't be focused on beginners.

The Future Focus of All Freelance Writing

Despite stepping back from the blog, All Freelance Writing will remain an active resource for new freelance writers -- even more than it's been in recent months when I was unsure of how to proceed.

Even when I put those things in someone else's hands, you won't be rid of me here. I'll be keeping most of my own attention semi-off-site by:

The newsletter is where I'll chime in on things like timely industry issues, warnings to help newer writers protect themselves, and anything else appropriate. Like I mentioned earlier, the blog will be reserved more for occasional reviews and reader questions.

I'm most excited to free up the time to work off-site on new resources for you. And some of those resources and other projects I'll finally have time to pursue will help me work toward something else important to me.

One thing I talked about in May's post was how absolutely fed up I am with insta-expert con artists that have been saturating the freelance writing community in recent years. They're a big reason I wouldn't walk away from the site completely.

My life has been impacted by liars, thieves, and frauds over the past several years to a degree I can't even put into words -- from someone I trusted doing irreparable damage personally to recently discovering a colleague I've known for at least 8 years (and also trusted) ripped off material from this very site. And the plan moving forward will let me deal with bullshit artists like those more head-on than I've been able to for a long time.

That's something someone needs to keep doing for the benefit of new writers who don't know their history, but it's also something I need to do for me.

So anyway, that's the gist of what's happening. Some of the changes have already been made. I was holding off on some others on the technical end until the WordPress 5.0 updates, but they've been delayed, so I'll take care of those before year's end. You'll also get a few more posts I've been holding off on before I go on vacation later this month.

Oh, and around the end of this year, you can expect a new freebie. I've had a nearly-finished e-book on setting and increasing your rates effectively, and it's just been waiting on me to put the final touches on and release it. But I didn't want to release anything until I knew where this site stood in my plans.

Rather than releasing it as a premium e-book, I'm going to give it to you for free as a thank you for the last 12 years (I can hardly believe this site's been around that long). So keep an eye on your inbox if you're subscribed. Or watch the site's Twitter account. I'll announce its release toward the end of this month.

One technical change you should know about is the future elimination of user accounts here.

I'll soon be removing the join link from the header of the site. And the only place to sign up will be during the advertising process such as users of the writer directory. And on the very rare occasion I allow a guest post here, I'll still set up accounts for those authors. But with the forum closing months ago, and the constant influx of new registrations that have no real purpose anymore, I'm shutting down general membership.

What does this mean?

In January, I'll be deleting thousands of user accounts from this site. The only accounts that will remain are:

So, if you signed up but you never used your account to publish anything publicly on the site, it will be gone in the New Year. I'll be going through any new registrations every few months moving forward to delete those as well if necessary. If you do have an account tied to any of those things, you don't need to worry about any changes. You'll retain the same access to your account.

One final thought -- don't expect me to be absent from the broader freelance writing community because of these changes. I've had multiple new projects in the works for freelance writers that I simply haven't had time to finalize. Now I will. And I fully intend to be active elsewhere. If anything, you'll probably see me around even more.

6 thoughts on “Major All Freelance Writing Changes for 2019”