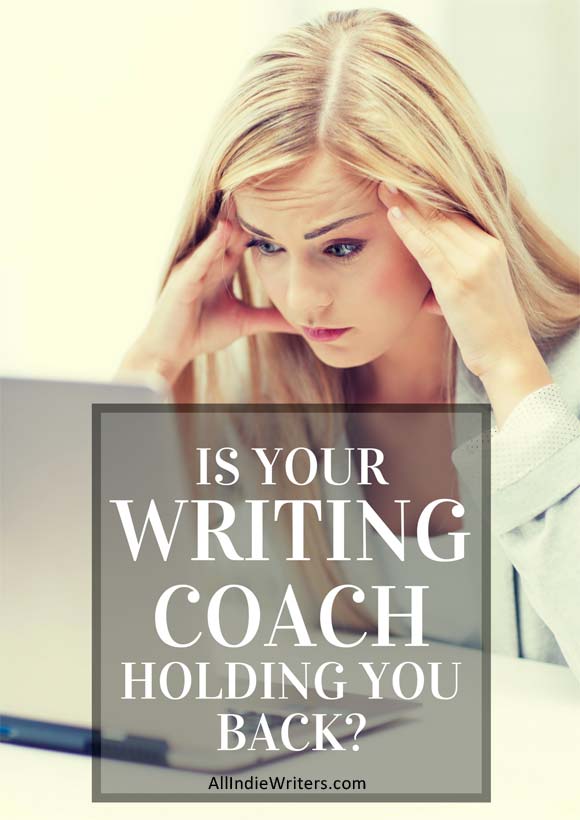 If you've ever felt stuck in your freelance writing career, you might have considered working with a coach or mentor. Maybe you've already signed on with one.

A good coach can be instrumental in helping you build or grow your freelance writing business. But the wrong coach has the potential to hold you back.

I've seen this far too many times over the years. For example, just last year I met a freelance writer who had been taking advice from a writing mentor for about a year. And they didn't have anything to show for it. Basically, they spent a year not growing their freelance writing business because they weren't getting the kind of advice they needed. They were being fed the same generic BS that this "coach" was throwing at everyone else. A year later, they had to start from scratch.

Now don't get me wrong. There are plenty of credible and reputable writing coaches out there. But there's a common theme to the coaching-related problems I most often come across:

You don't want to spend several months to a year working with someone who can't give you the kind of help you need. Even more important, you don't want to work with a writing coach who is actually going to hold you back, putting your freelance career at risk.

While this topic has been on my content calendar for a few weeks now, it's recently become even more near and dear to my heart. Last week I agreed to coach a newer colleague.

This is something I don't do often. That's partly an issue of time as I'm usually swamped with my own work. And it's partly a holdover from my PR consulting days. As much as I keep considering going back to consulting in some form (such as officially working as a writing coach), I much prefer to make my living actually writing.

But there's another reason I don't advertise regular coaching services: I'm highly selective about which writers I'll work with. It's important to me that any writer I take on is a good fit. Not only do they need to specialize in an area where my expertise is highly relevant, but they need to be at a point in their career where it's clear they're ready and willing to put the work in.

No writing coach is going to be the right fit for every writer willing to part with their money for coaching services. And any coach who tries to tell you otherwise is full of shit.

So how do you know if your writing coach is going to hold you back? Let's start there and move on to some other warning signs:

As I've already pointed out, no coach or mentor is going to be a good fit for every single writer who wants to work with them. And any coach who pretends otherwise cares more about lining their own pockets than helping their clients or mentees. The right coach is someone who genuinely has your best interests at heart.

2. Your writing coach works in a completely different specialty area than you do.

When choosing a writing coach, it's important that you choose someone who already has the kind of career that you want to build. For example, you wouldn't work with a coach who specializes in newspaper journalism if you're trying to build a freelance blogging career. Instead, you would look for someone who already runs a successful freelance blogging practice, such as Sophie Lizard.

Choose a writing coach in a position where you'd like to see yourself in the next five to ten years. Then the advice you get is more likely to be in line with your goals.

3. Your writing coach always seems to talk in black and white.

These are the writing mentors who constantly tell you what you must do -- your marketing must include direct pitching, or you absolutely have to double your rates right away for example. There is rarely an in-between allowing you to customize the advice for your situation and your specific target market. It's half-assed mentoring.

It's one thing to push you towards something better such as steering you away from race-to-the-bottom marketplaces or client groups with a history of exploiting writers (like content mills). But it's a very different thing for a coach to try to control the specifics of your business. Those are your, and only your, decisions to make

4. Your writing coach advises you based on their own business rather than yours.

This is the writing coach who only ever talks about themselves -- how they find clients, what they charge, and what's worked for them. You aren't paying them to talk about themselves. And what worked for them is never guaranteed to work for you in the same way. You don't know how the market might have been different when they were in your position.

Remember that it is your coach or mentor's job to help you reach your own business goals and make better decisions towards those goals. It is not their job to convince you to be their clone.

5. Your writing mentor doesn't make it clear what you're getting up front.

When you work with a writing coach or mentor and you're paying them to advise you, you'd better know what you're getting before you pay them a dime. When will they be available to you? Only on the phone? Skype? Via email? If you have follow-up questions after a chat will they take the time to answer you? Will you be charged more? What you're going to get from a coaching relationship should never be a surprise to you.

That said, it also shouldn't be a surprise to your coach. If your writing coach doesn't take any time to review your situation before agreeing to work with you on a paid basis, run.

It's impossible for them to know if you're the right fit for each other without discussing your goals and concerns up front. That can be as simple as you filling out a brief questionnaire or them taking a quick look at your existing website or portfolio to get a feel for what you're already doing. They can't come into your first coaching session prepared to give you custom-tailored advice if they don't know your needs and expectations -- things that should be laid out with any type of consultant up front.

Any respectable freelancer is going to discuss project terms and scope before making a client commit to hiring them. And as their coaching client you deserve at least as much respect as they provide to their freelance writing clients. Make sure you know what you're getting before you sign on, and make sure your future writing coach is equally prepared for your first coaching session. And know that if they aren't asking about your situation and needs from the start, your first paid session will be less about true coaching and more about an introduction or initial consultation with an up-sell for future sessions.

Have you ever be burned by a professional coach? Have you had a positive experience? If you were looking for a writing coach or mentor today, what are the primary things you would be looking for?