Many of you probably caught this post on PBS.org about content farms last week. When I read it, I found it very interesting that Demand Media turned down the opportunity to be interviewed for the piece. Usually, they can't be tamed when it comes to spouting their really cool: Hey, we never said we were journalists... but look at our awesome brand of service journalism (not to be confused with actual journalism because we've added another word IN FRONT of journalism. It's like the difference between Soda and DIET Soda. Two. Completely. Different. Things.) rhetoric.

Instead, they decided to opt out of the interview and write a piece of their own discussing this article, as well as some of the other articles that have attacked them recently.

After reading their response and stabbing myself repeatedly in the eye as I did (it's an automatic response to Demand Media, I can't help it), I thought I'd go over a couple of things that they wrote which really annoyed me.

1.In their response, they state:

"While many of you took the time to weigh in on the conversations around the Web, one particular comment that referred to writers who have a "complete disregard for the craft and the reader” struck a nerve because, in spite of what people are writing about us, all of us here at Demand Media and the vast majority of you, do care about the writing craft and for the reader. The editorial rigor and process for creating content is just part of the equation; the other important piece is the pride in what we do and pride in the articles you touch."

Here's the thing---the, "all of us" bit about caring about the craft of writing and the reader doesn't ring true. First of all, many DM writers have spoken about how quickly they rush through assignments, "cramming" work in to a short time period and doing just enough research to "sound credible," etc. (be sure to read the comments of the linked articles to see these comments by DM writers). If DM actually cared about this startling trend they would pay their writers and copy editors more so that they could devote the time necessary to develop articles that are executed with care. I know you need a decent sized profit margin to go buy super expensive vacation homes on undiscovered islands and stuff (or whatever it is that rich people do with their moolah), but don't argue with every single self-confessed uncaring DM writer by saying the equivalent of, "Nuh-uh, we care about quality" and then continue to pay an amount of money per article that says you really don't care about quality. Your writers are saying they don't care. Stop denying that this is a problem and do something about it.

2. In their response, they state:

"We are not a robotic organization that’s only concerned about numbers and data. We are a media company. We work together to tell stories. As the Dean of UCLA’s School of Theater, Film and Television Teri Schwartz said, “Story is the driver. It’s the timeless classic, universal piece that binds us all together.”"

C'mon folks, we're smarter than that. They have an algorithm that determines what people are going to search for and they make sure that they can create quick content to answer that search request. They do this so they can make money---they have already said that they create the pieces based on the potential money around them.

3. In their response, they state:

"Tonight, I will read my new issues of the New Yorker and Texas Monthly that showed up in my mailbox and that I look to for inspiration."

Oh come on. The New Yorker and Texas Monthly use human effort for inspriation on stories. They want to appeal to a target audience with articles that bring solutions, information and entertainment relevant to that audience. They use human brain cells to create twists and new ways of looking at topics. They do not use algorithms to create topics that will take over the entire reading audience of the internet.

4. The last thing they said that really put me over the top was this:

Um, excuse me? What is this, like trying to manufacture Stockholm Syndrome in your writers? I'm not saying there hasn't ever been criticism of Demand writers, there has---and many articles that have done so have over-generalized and been unfair. But when an article criticizes a model or a pay scale that doesn't mean the writers are being criticized. Even if it includes quotes from writers who admit to writing poorly. It is criticizing the model for creating an environment in which writers feel that is their only choice.

Of course, playing the victim is one thing but stacking the deck against your critics is another. Many sites, including this one, have gone out of their way NOT to criticize DM writers. But, even when doing so, Demand company ambassadors and fans go and round up the troops to attack anyone who speaks negatively about the company or to respond to requests for input about the company and create a manufactured influx of "happy experience" letters and comments. They do so by posting links to negative articles in the Demand Media forums---which is also what happened with the comments on the PBS piece.

Personally, I'm starting to think of Demand Media as the corporate equivalent of Sarah Palin. Too much hubris, faulty logic, flip-flopping stories and marketing attempts and in the long run, unimportant and forgettable if we simply stop talking about them. Which is what we at All Freelance Writing are going to do.

It's like the Speidi thing---notice how they got divorced when people stopped talking about them? So we at AFW pledge to stop talking about Demand Media. 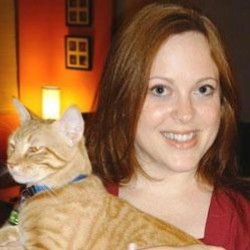 Yo Prinzel
Yolander Prinzel is the profit monster behind the Profitable Freelancer website. She has written for a number of publications and websites such as American Express, Covestor.com, Advisor Today, Money Smart Radio and the International Travel Insurance Journal (ITIJ). Her book, Specialty Ghostwriting: A New Way to Look at an Old Career, is currently available on Amazon.

Latest posts by Yo Prinzel (see all)