Not long ago I published a review of AutoCrit, a self-editing tool designed for authors of fiction. I also found it helpful for nonfiction work such as blog posts. Shortly after reviewing AutoCrit, I was contacted by a rep for Grammarly, another online editing tool for writers which serves as both a spelling and grammar checker.

The kind folks at Grammarly set up a test account for me so I could play with things and share my thoughts with you.

It was interesting to see how different the two tools were. I already let you know what I think of AutoCrit. So today let's dig into Grammarly by looking at some of the tool's best features and also some of the (mostly minor) problems I came across while testing it.

Here are some key features and positive points of using Grammarly.

This is the online version of Grammarly, where you can either upload or paste text you want to check. It has a simple, clean interface once you're in there. And the interface is fairly straightforward. You can see what it looks like in the screenshot below: 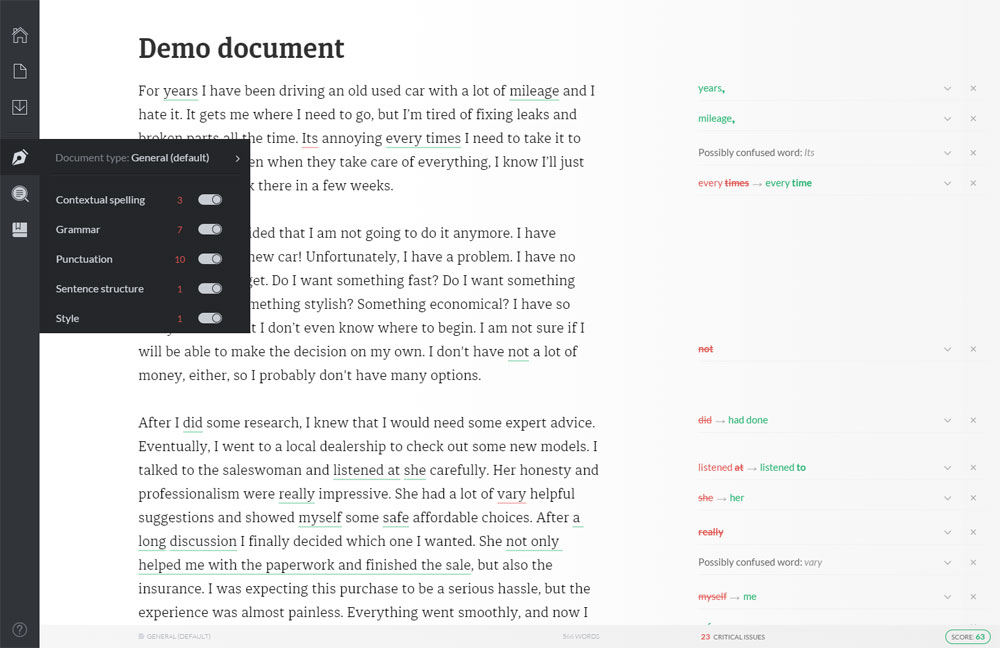 This was the primary version of Grammarly I tested before reviewing the service. That's because I do most of my writing in Scrivener, and therefore had to copy / paste my work in order to use Grammarly's tools.

If you use Google Chrome and you tend to write directly in your browser, you might enjoy Grammarly's Chrome extension. It works on social networks like Facebook and LinkedIn, as well as in Gmail.

They mention on their site that it works on WordPress too, but I didn't find that to be the case. On this site, for example, it only shows up if you write a blog comment. It doesn't do anything when viewing the post edit screen in your admin area, nor does it show up when posting to the public forum.

Despite that, it can come in handy in the places where we tend to write the quickest. That alone makes the extension a worthwhile tool if you want to avoid sloppy mistakes.

Update: After writing the review I discovered that Grammarly does work with WordPress if I'm using the text / HTML editor rather than the visual editor. This might be a broader issue with the two tools working together, or it's possible that a plugin or theme is the issue -- more likely a plugin as I saw the same behavior on a couple of different sites.

The only issue I had with the extension when writing blog comments was that sometimes I would be finished and ready to submit a comment before the Grammarly icon would finish spinning to give me results. So it might not be for the impatient. Still, this is a nice feature.

Grammarly has a downloadable add-in for Microsoft Word. If you write in Word (from Word 2007 on), this might be a good option for you. Admittedly, I didn't test this feature, so it's not relevant to my overall review. But it's worth mentioning.

As I mentioned previously I work mostly in Scrivener, so this wasn't helpful for me. Also, while we have an extra license for the current version of Office, I've refused to update from my old 2003 version (which works perfectly by the way). I can't stand Microsoft's newer "ribbon" design, which takes up far too much screen real estate on a laptop. So I keep their older version and a copy of Open Office on my laptop for opening client files, but I almost never use Word for my writing.

Instead, my tests of Grammarly involved pasting a client post from Scrivener to their online app.

One of the issues I had with AutoCrit is the fact that you're locked into one of their yearly pricing plans. They didn't offer monthly options. And given that they targeted authors of fiction, that was strange to me. After all, authors often have heavy editing periods where the tool would be handy, but also heavy writing periods where they might not edit at all. So, basically, you could end up paying for the app when you're not even using it.

That's not a concern with Grammarly. While they do have a yearly option (at $139.95 per year), they also offer monthly and quarterly payment options for their premium version (at $29.95 per month and $59.95 per quarter respectively).

Grammarly also offers a free version which is great if you want to get a feel for the web app and Chrome extension before buying. Here's a breakdown of the differences between the free and premium versions from their website: 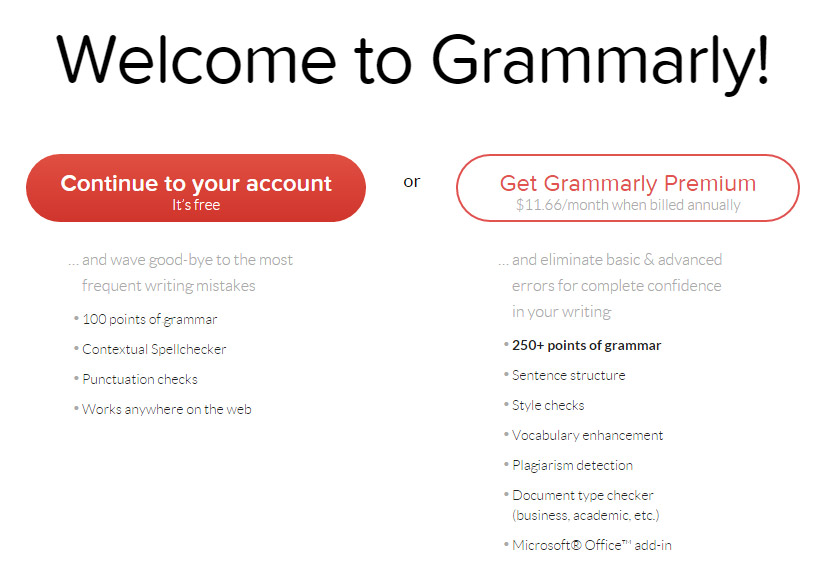 Whenever I publish a review here, I make it a point to share not only some of the better features, but also any issues I had or suggestions I might have for improvement. Here's what I didn't love in this case.

One of the things I love about AutoCrit is the fact that I feel most of its suggestions improve my writing. I didn't feel that way as often with Grammarly. Some recommended changes felt strange or diminished the impact of copy. Others simply didn't improve things in a way that made for better reading.

There's a good example right in their demo document. Here's the original selection:

"After I did some research, I knew that I would need some expert advice."

The recommended change for this sentence is:

"After I had done some research, I knew that I would need some expert advice."

This sentence could have been improved, and that's something I expect from a tool like this. For example, and maybe this is just me, I would have preferred to see something like this:

"After I researched car models, I knew I would need expert advice."

"After I conducted research, I knew I needed expert advice."

The "that" and "some" were unnecessary. Even if they thought past perfect was the best choice, "had researched" seems to be a more logical option than "had done some research." In the example document, however, the tense seems to change quite a bit. So who knows what they were going for?

After logging into my Grammarly account for the first time, I was greeted by this screen:

Do you see that block that says "New" and has a document icon? Well, the lower portion of that button area says "Upload." It's designed to look like a single button. That was incredibly confusing the first time I saw it, because all I wanted to do was paste something from Scrivener into Grammarly's web app.

Apparently they're two separate buttons butting up against each other. You can click the "upload" button to upload a document, or you can click the "new" button to paste text in. It seems like a silly design choice, and one that can be easily remedied.

Don't get me wrong. Once you know how they've set it up, it's not a big deal. But it's unnecessarily confusing for new users. And given how straightforward the web app's interface is once you're in there, I think getting there should be just as intuitive.

This is a minor issue, but was a little bit frustrating. When you log into your Grammarly account, it seems you can no longer visit the website's home page. Any time you try to visit Grammarly.com, you're bounced to their app instead.

For most people that might not be a problem. But when I was trying to look up features and everything on the site while testing it out, it was hardly convenient. It's also a little bit confusing, and a pretty basic usability issue.

My suggestion is to stop the automatic redirect. There's no reason people can't bookmark app.grammarly.com as easily as the home page URL. And the home page's "Log in" link could simply change to a "My App" link or something similar after a user logs in. That would be more in line with typically expected behavior on a website, and it wouldn't risk confusing or frustrating users when they want to access the base site for some reason.

This is another minor complaint. But it's an annoyance.

Any time I log into the Grammarly app, I see the below prompt which is rather large and right at the top of the page (click the image to see its actual size).

The problem? I'm viewing Grammarly in Chrome, and I've already installed the extension. It's even active. So there's no reason to keep prompting me to install it.

A big deal? No. But I dislike anything taking up unnecessary screen real estate, and I could see it getting confusing for someone newer to the tool or to Chrome. It would be great if this automatically went away if the extension was active rather than having to be manually dismissed.

So, I have to be honest here. Grammarly was not for me. That, however, doesn't mean I wouldn't recommend it to any other professional writers.

Having things split between multiple versions of the tool wasn't ideal for me, especially with me writing most things in Scrivener anyway. But if your writing is split between the web, Word, and other software where you might want to paste things into their online app, you might find those options convenient.

I know quite a few fellow writers who are equally fast typists, so this isn't special. But it is an issue with Grammarly's browser extension. The only time it would really come in handy for me is with blog commenting. And because I can type most comments extremely fast, the tool sometimes couldn't keep up.

I was left waiting and watching the little icon spin for a while before I could review the suggestions for my comment. For me, it was quicker to proofread things on my own and move on. Waiting around negates any benefit of being able to write quickly so I can get back to other things.

If you don't type as quickly, the browser extension might be wonderful for you in similar situations. But if you do write at similar speeds, it might not be a big help for shorter writing samples. (And I don't recommend writing longer work in your browser where it can be easier to lose things.)

All of that said, Grammarly won't hurt as an additional check on your work. And I can see it being a valuable tool for writers who are just getting started, writers who tend to rush through social media updates or blog comments, or writers who don't speak English as their first language.

This is the kind of tool that I can't recommend in a blanket way, but I do think it's something you should try for yourself. See if it offers the kind of feedback you personally need. If it does, that's great. If it doesn't, there are plenty of other tools you can try.

While this isn't a tool that I'll switch to for use on a regular basis, I do think it will be a great fit for many members of the All Freelance Writing community. So don't take my personal preferences as an overall condemnation of any kind.

At the very least, consider creating a free account to take Grammarly for a test drive.

18 thoughts on “Is Grammarly a Good Tool for Professional Writers?”