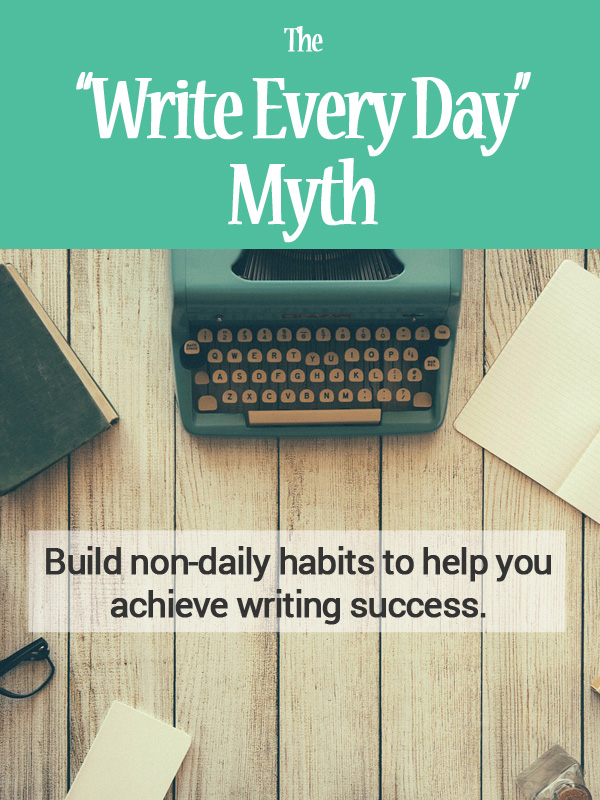 There's one kind of blog post I dread seeing in my feed reader. They're the blog posts that sport headlines like "The ONE Thing You Need to do to Become a Successful Writer" or "The Best Writing Advice You'll Ever Get."

Why do I dread these kinds of posts? Well, other than the obnoxiously gimmicky clickbait titles they tend to use, I usually know what the advice is going to be:

It's like there's some unwritten rule that if you give writing advice it has to contain this little nugget. And do you know what? That's fine. Or at least to a point.

The problem is when writers insist this is the key to a successful writing career. Here's a tidbit for you: it's not. That's right. You can be a successful writer without writing every single day.

Why "Write Every Day" Can be Bad Advice

I'm not saying writing every day is a bad thing. What I'm saying is that no writer should put their schedule and habits on another writer, implying others can't be equally successful if they don't do the same things. Yet that's what frequently happens.

There's this idea that if you're serious about your writing you'll write every single day, no matter what. And if you don't write every day you're somehow lesser. That's bullshit.

Would you consider a doctor less serious about their job if they took weekends off or *gasp* took a vacation? Would you tell a performer that they can only succeed if they perform every single day? Would you tell your mechanic that he's not really a pro in his work because he doesn't put in hours seven days a week? (Go ahead. I dare you.)

We don't expect people in other lines of work to put in time every single day. And guess what. Writers aren't special little snowflakes who require more practice than everyone else. Plenty of writers support themselves without writing every day. And most of the writers I know who are earning six figure incomes don't write every day. They might during some weeks (due to a tight deadline or spending time on passion projects), but they don't force themselves to do it all the time.

The issue with implying writing success only comes to those to write every day is that it alienates a large group of writers -- those who can't. They might write part-time alongside a full-time job for example. It's cruel to discourage new writers in this position.

Which honestly makes someone more professional or successful? Writing for an hour or two a day, seven days per week? Or writing only on the weekends, but for six or eight hours each day? Each writer would have approximately the same amount of time invested. So why discourage part-timers and make them feel like they'll always be less than those "serious" writers who squeeze a little bit in each day?

Bad Advice Can Come From a Good Place

I'm not saying writers who give this advice are doing it maliciously to put down part-timers or those struggling to make more time to write. I think the advice usually comes from a good place.

These folks are trying to point out that writing success comes at least partly from habit. You need to get into the habit of actually writing and getting things done. That's true for authors. It's true for freelancers. And it's true for bloggers too.

The mistake is thinking habits have to be daily. They don't. It's very possible that the people giving this advice do have to write every day to be successful. It might just be their process. Or they might struggle to stick with a writing habit if they take any time away from it. But one person's hang-up doesn't need to be projected onto your career.

So the next time you see someone tell you the only way you'll be a successful writer is to "write every day," go ahead and try it. See if it helps. But don't let it discourage you if that schedule doesn't work for you. Come up with a schedule that does, and turn that into a habit.

Daily habits are easier for some people to stick to out of sheer repetition. But if you can't write every day, here are tips to help you build better non-daily writing habits:

1. Add it to your calendar.

While you're trying to build a new habit around your writing schedule, add writing sessions to your calendar. Treat them like appointments that you have to keep with yourself. Or even set up alarms to remind you when it's time to write. Better still, add your rest days (or other activities on those days) to your calendar as well to turn it into a week-long routine.

If you struggle to stick to new habits on your own, consider using an app to keep you on-task. There are plenty of great habit tracker apps out there. Play with a few of them to see what you like. Here are a few recommendations.

3. Focus on targets other than days.

When you write professionally, you need to know what you're working towards. And sometimes focusing on an end goal can help you build non-daily writing habits more than focusing on the actual number of days you plan to write each week.

For example, let's say you're writing a novel. Your goal might be to write 5ooo words each week. It doesn't really matter if you split that up over seven days, write it all in one sitting, or fall somewhere in between. If you're a blogger, you might have a goal of writing a certain number of posts per week. Again, it's the end result that matters most; not when you schedule in your writing time.

What about you? Do you write every day? Do you maintain a consistent schedule even if it isn't daily? Do you think writing every single day is the only way to be successful as a professional writer? Share your thoughts, tell us about your writing schedule, or share your tips on building better writing habits in the comments below.

I've often been cited as a source and asked to contribute to industry publications. This site has also been ranked as a leading resource by top magazines & blogs. Some examples: