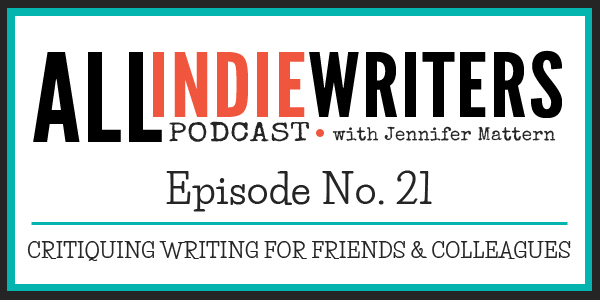 This week's podcast episode is now up. If you aren't subscribed yet, you can listen from the show notes page (or directly via SoundCloud).

Yolander and I chat about serving as a critique partner, beta reader, or editor for friends and other writers you know well. Is it a good idea? And if you do writing critiques for people you're close to, how can you do so delicately without risking those relationships? We'll cover that, and more, in this episode.

Note: Yo and I had some technical problems recording this episode. Twice actually. The podcast gods just didn't want it to happen.

During the first call, we chatted for three hours. The only parts that survived that call were from a personal chat early on about things not fit to publish here (and you know there isn't much I won't say here, so that's how bad it was).

The second call was about two hours. The recording app somehow got the beginning, then skipped about an hour, then recorded the rest. Yeah. Told you. It just wasn't meant to happen.

Because of that, this episode was handled a little bit differently. After the usual intro you'll hear the beginning of our recorded call. Then you have to put up with me going it alone in the middle (like a mini solo episode in the middle of a guest-hosted show) to fill in some of the blanks that the app skipped. And then you'll hear the bulk of the recorded show with Yo.

The parts with Yo are much more amusing. I was told I sound "sad" in the middle clip. Well, yeah. You'd be sad too if you essentially wasted four hours recording only to lose some of the best parts. We're all lucky Yo didn't murder me for asking her to do that the second time.

Needless to say, I'm dropping that app. Two major failures are just too many. And this app has been going downhill with every update. I'll be doing a lot of Skype recording tests this weekend (not only as an alternative, but also because I've been planning to bring a few international freelancers on to chat). But, in the meantime, if any of you know a decent Android app that can record both sides of the conversation reasonably clearly (through a phone call or the Skype app), I'd love to hear about it!