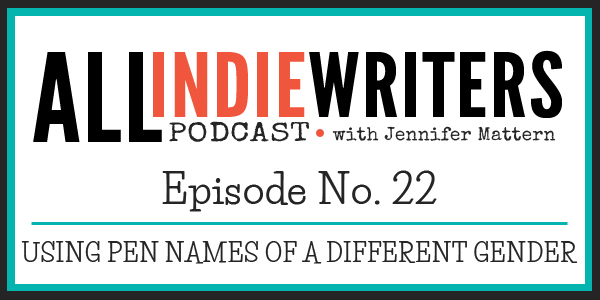 This week on the All Freelance Writing Podcast, I tackle a question from Jeremy Tarrier. He was curious about how a writer might protect gender anonymity when writing under a pen name (or if it's really even a problem).

This was an interesting topic for me because I actually have the opposite problem: I write under an ambiguous pen name that could easily be mistaken for a male, but I want it very clear in the horror genre that I'm a female. In the episode, I explain why I ended up in that position and share some thoughts on writing under gender neutral pen names in general.

I also explain why, in the majority of cases, I don't think writers should be overly concerned about keeping their gender top secret. And I'll explain how Jeremy's idea of using technology to mask your gender could actually backfire.

If you've been in the position of writing under a pen name of another gender, I'd love to hear your thoughts. Was it important to you that your gender stay an absolute secret? Were you ever "found out?" (And if so, were you prepared for that?). How did that secrecy impact your ability to market your books?