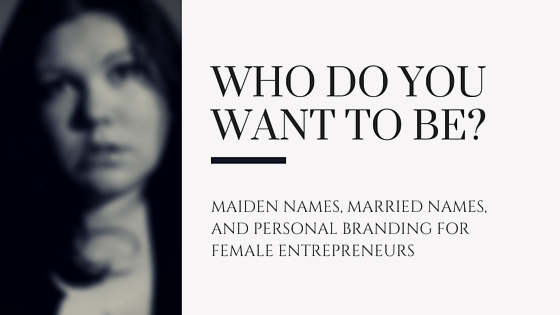 Update: As of May 6, 2016, I've finished this process and my name is officially and legally "Jennifer Mattern" again.

Chances are good you've only ever known me as "Jenn Mattern." But that's not my legal name, and it hasn't been since 2012 when I got married. Soon that will change. I've decided to go back to my maiden name.

On numerous occasions, I've talked with other female entrepreneurs who were facing the same decision. That's what I'd like to do here, in case any All Freelance Writing readers are deciding what's right for them or regretting their decision post-change and thinking about taking their maiden names back. There's no right or wrong option here. Every woman's decision about this has to be her own.

Being a woman and a business owner with a longstanding personal brand, deciding what name to use after getting married was a complicated decision.

I'd built my business on my personal reputation. Clients and colleagues all knew me as "Jennifer Mattern." I've been cited as a source on countless websites and in major media outlets under my maiden name. I have bylines under that name. I'd watched colleagues go through long drawn-out name changes professionally, trying to avoid losing and confusing people along the way.

I didn't want that. But I did still want some semblance of a "family name," not for myself so much as for future children (my mom and sister have different last names, and I preferred not to go that route if I have kids down the road). At the same time, I wanted to protect the privacy of my husband and any future kids. My business is very public. I wanted some way to have the same name as a cohesive family unit, but still operate publicly under my maiden name to shield them to some degree.

So I went with what I felt was the best option at the time. Instead of changing my last name to my husband's, I kept mine and tacked his on at the end (not hyphenated -- I actually have two separate last names).

That worked for a while. I could still operate under my maiden name publicly and sign contracts using my full legal name. It was kind of like writing under a pen name (of which I have several), but not quite.

But the truth is, I never fully embraced the name change.

I changed it on my social security card and driver's license, but never my passport.

I changed it with one bank but not my other one. The bank I changed it with couldn't even make my double last name work with their system. It was a nightmare getting both names included in my financial documents and on my cards. In one case they actually issued me two debit cards instead of one -- one under each of the last names. I kid you not.

I'm not only a U.S. citizen. I'm also a German citizen. And legally, in Germany, my name is still Jennifer Mattern -- not the double last name. I put off the process of changing it there (probably why I didn't change it on my passport here, which had to happen first). Again, you can see how committed I really was to my initial decision.

I still use my maiden name socially as well. It's funny. I was talking with my mom recently about the possibility of changing my name back. Her reaction? "You know.... I never really thought of you as a [husband's last name]." And do you know what? Neither have I! And I'm now in the process of going back to only my maiden name.

Deciding to Go Back to My Maiden Name

Going back to my maiden name isn't a sudden decision. I've been thinking about it for well over a year now. There are a variety of personal and professional reasons for this. Here are some examples:

While it hasn't been a huge issue with clients, it gets trickier when I'm signing up for business services and websites where registering with your legal name is required. If that's shown publicly in any way tied to my account, I don't want to use my husband's name.

As I mentioned earlier, one of the reasons I took the two-name route initially was to help me protect his (and any future kids') privacy given that my business operates so publicly.

Then there are the bank issues I mentioned before. It's a damn nightmare when I need my financial documents to match pretty much anything else. And the people at the bank were awful, trying to get me to agree to use a different version of my name in their system. My conversations with them tended to go something like this:

"No, you cannot hyphenate it and make it one name in my financial documents. That's not my friggin' legal name! Also, no, I will not let you enter Mattern as a second middle name so you only have to use my husband's last name on my cards, checks, and everything else. If I wanted to go by his last name, I would have chosen that as my legal name!"

Seriously, I need a new bank. (And funny story -- one of their bank tellers overheard all of this, and as I was leaving she pulled me aside to tell me Wells Fargo, where she used to work, was perfectly capable of handling this kind of naming issue. I'll keep that in mind, thanks!)

Then there's the personal side. Honestly, I don't know if I'll ever be fortunate enough to have kids. Right now I'm not even trying anymore while I focus on other things. So choosing a certain name in anticipation of being a parent just doesn't make a lot of sense anymore.

More importantly, while I thought I'd be thrilled to drop my last name because I don't particularly like having my father's, I found myself unable to let it go when I got married. Truth is, I'm attached to it largely because of my grandfather.

I adored him. He's also the reason I was born a dual-citizen, an immigrant to New York right after WWII. I'm a big family history nut, and frankly I like having that tie to him and my German roots.  It's important enough to me that I've already decided if, or when, I do have kids, I want them to each have my maiden name as a second middle name (my German citizenship will also pass to them, so I want them to have that tie as well).

As of now, I still have both last names. After a lot of back-and-forth with a few government offices about who needed to change my records first, I think I have it all sorted out. But that came a little too late unfortunately. My state's presidential primary is coming up in a few weeks, and I don't want to risk any confusion in the voter records if the name change doesn't finalize quickly enough. So I'm waiting until the end of this month to make it official. But by early May, the name you know me as will reflect my legal name again.

My situation certainly isn't typical. Most freelancers don't have to worry about changing legal names in multiple countries, and they probably won't run into the banking issues I did if they choose to simply switch names rather than double up. But hopefully this gives some of you something to think about. Changing your name can affect you in unexpected ways. You probably have more married name options than you realized. And sometimes you might even regret your decision and decide to switch back. And do you know what? That's totally OK!

Now I'd love to hear from you ladies (and gents, if any of you decided to take your wife's name or combine them in some way). When you got married, did you keep your maiden name or change it? How did it affect your business? And have you ever considered changing it back?