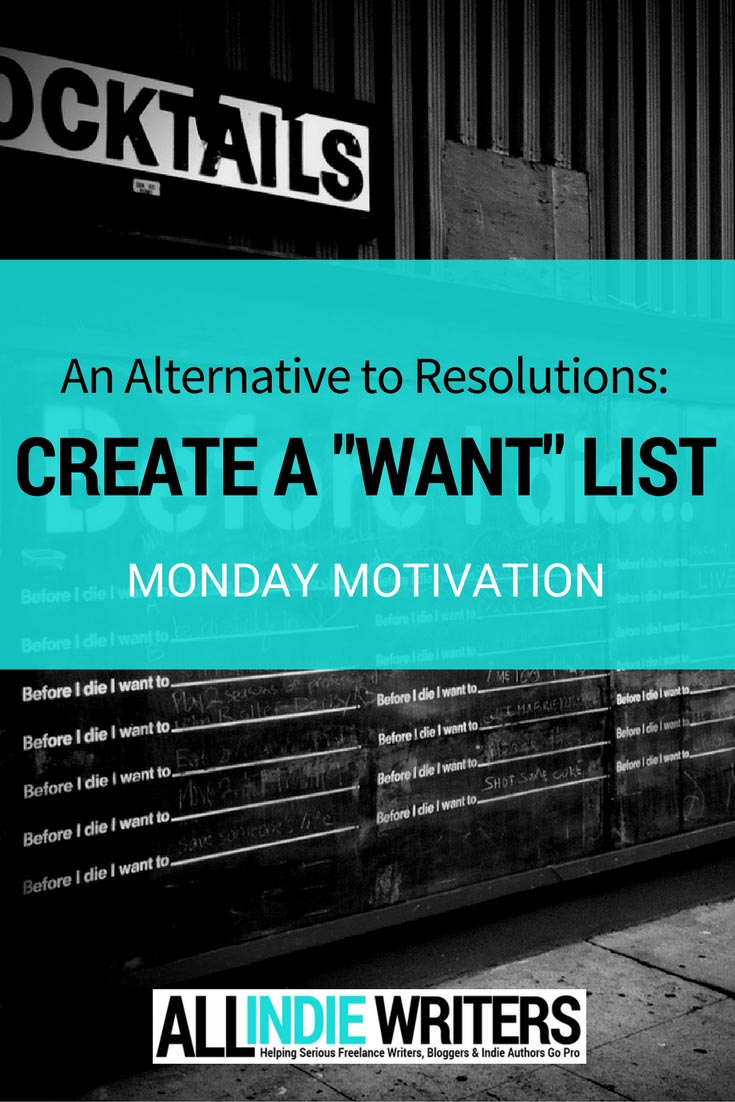 Every time a new year rolls in, the focus is on change -- often drastic. And these are some of the tools we use in seeking that change.

Some (like me) love that. It can be fun. It can be exciting. We thrive on the challenge.

But for other writers, New Year's resolutions do little more than add stress and unrealistic expectations.

It doesn't have to be that way.

Don't focus on all the things you think you need to change (which, let's face it, is basically us criticizing how we are now -- we're kind of assholes to ourselves like that).

No joke. It's that easy.

"Self, what do I really want from my life?"

Then write it all down.

These can be physical things. They can be situations in your life. Or they can be things you want longer-term.

Whether you feel absolutely miserable or quite happy (or anything in-between), what would make you even happier a year from now? Five years from now? Ten?

How is a "Want" List Different From Goals and Resolutions?

Goals and resolutions are a bit more specific than a "Want" list. They're directly about taking action.

Unless you don't take that action quickly enough, and you feel like crap because you let yourself down. Again.

Then you say "f* this," give up, and vow to never make another resolution again. (Until next year.)

Rather than strip yourself of motivation to create new goals because you didn't achieve some end result as fast as you would have liked, a "Want" list lets you turn your attention towards an appreciation of progress.

Let's look at an example:

Say you're an aspiring indie author. You could set a resolution to write and publish your first book this year.

I don't know about you, but to me that sounds an awful lot like work. Eww.

If you go the "Want" list route, what is it that you really want there?

"I want to be a published author."

Don't worry about all the SMART goal stuff. Don't put a deadline on yourself for example. Don't worry about length, or sales goals, or anything like that. Just bask in the glow of that image you have -- you... a published author.

I don't care what you call it. Just write it down.

And that's the key really: goals and resolutions are about the chores we set for ourselves while a "Want" list is all about focusing on what makes us happy.

A "Want" list lets you focus on all of that gorgeous scenery (progress) you pass through on your way. The twists, turns, and detours don't have to stop you. It just makes the journey more bearable, and dare I say enjoyable.

It's not enough to have a list of things you want or things that would make you happier.

I learned that the hard way last year.

Believe it or not given how sour I was on 2016, I started the year on an optimistic note.

I wrote out my "Want" list for the year, thinking I'd actually realize some of it. (It's just a Word document titled "What I Want" -- I'm super creative if you haven't noticed.)

The year started out great. I'd just gotten healthy after a long time of feeling like absolute hell. Business was looking up. Relationships were good. I mean, seriously, I was downright giddy to get out of bed each morning. Everything was rainbows and sunshine.

Then something unexpected suddenly happened that changed everything. Everything.

Things still seemed really good though for a few months. Different, but good.

In that time, I'd forgotten all about my "Want" list. And I was so down then, that was probably a good thing. I would have printed it out, deleted it, then burned the physical copy in some type of ritual sacrifice for good measure.

Things out of my control kept happening during the first half of the year.

Those things changed pretty much everything that mattered to me for the foreseeable future. Suddenly what I wanted felt out of reach.

I'm not used to that feeling (though last year sure tried to change that).

Nine times out of ten, I get what I want. Ten out of ten when what I want relies only on me. So 2016 was off to a really bad start.

But then one day I saw that "What I Want" document. And I was curious. I barely remembered writing it. So I opened it.

And I read it.

And I started laughing.

I wanted what six months ago? What the hell was I on when I wrote that?

OK. Not all of it was funny. Some was pretty depressing to see.

Because in half a year, I hadn't made a lick of progress. Not even the teeniest, tiniest baby step of progress towards the few things left on the list that really mattered to me.

Sadly, 2016 didn't get any better. I mean, it did for a few months. And then it reverted to all-out shit-storm status.

But mid-year I did review that "Want" list. And I did make changes. And this time, I did make some progress. Maybe not a lot of progress. But enough to keep me going.

And that's all you have to do.

Review your list every now and then. This year there won't be any six-month breaks for me. I plan to review mine weekly and ask the all important questions:

This really is an easy exercise.

Know what you want. And let yourself have it.

No one else is going to do that for you.

And the best part? There's no guilt involved. It's not about a concrete goal, a year-long deadline, or those awful unrealistic expectations so many people put on themselves.

Didn't get that book published in six months? Well, did you make progress?

As long as you don't give up, you're still golden.

And hell, even if you do give up, guess what.

You can pick your ass back up and make progress now. As in right now. Today. No excuses.

Take just one step. And then be proud of yourself for that. Enjoy it.

Then you'll be ready to take another.

But there's one more question I'll ask myself each week. And it's something you should regularly ask yourself too:

Is this still what I want?

There's no "here's a hard goal, and I'm a failure if I don't reach it" bullshit.

Your "Want" list is all about you. It's about doing what makes you happy.

It's about remembering to make yourself happy.

And if working towards something on your "Want" list no longer makes you happy, then it doesn't belong there anymore.

This can go two ways:

Maybe in the course of writing that first book you'll realize you don't enjoy the process. You don't want it anymore.

And maybe in the process of writing that book, you'll realize you enjoy writing shorter pieces about your area of expertise instead -- and what you'd really love is to turn that planned book content into a high authority blog.

Sometimes we don't really know what we want until we've experienced what we don't.

I'm living proof of that. My big plan for 2017 professionally is to go back to my roots. You can read about that in my November post, "Year-End Planning & Goal-Setting: The 'Screw 2016' Edition," or hear more about it in my New Year podcast with Princess Jones later this week.

But suffice to say, I made a lot of mistakes in recent years because I listened to other people before myself and I let myself be led to believe I should want certain things in my business that ultimately haven't made me happy.

Don't stick with bad decisions for months or years because you're afraid to change your mind or you think it'll make you a failure.

Admittedly, it was probably more stubbornness than anything in my case. So don't be like that either.

What do I want?

Ask yourself that. Ask it often.

Be selfish. In this particular exercise, that's not only an option -- it's a requirement.

It's the only way to be completely honest with yourself.

And until you've done that, you're not ready to discuss those wants and what they might mean in a larger context with anyone else who might be involved anyway.

Do what you want for a change.

Put together your own "Want" list. And worry less about getting from Point A to Point B, and focus more on simply moving forward and enjoying that journey.

I'll show you mine if you show me yours. What do you want? Tell me in the comments.