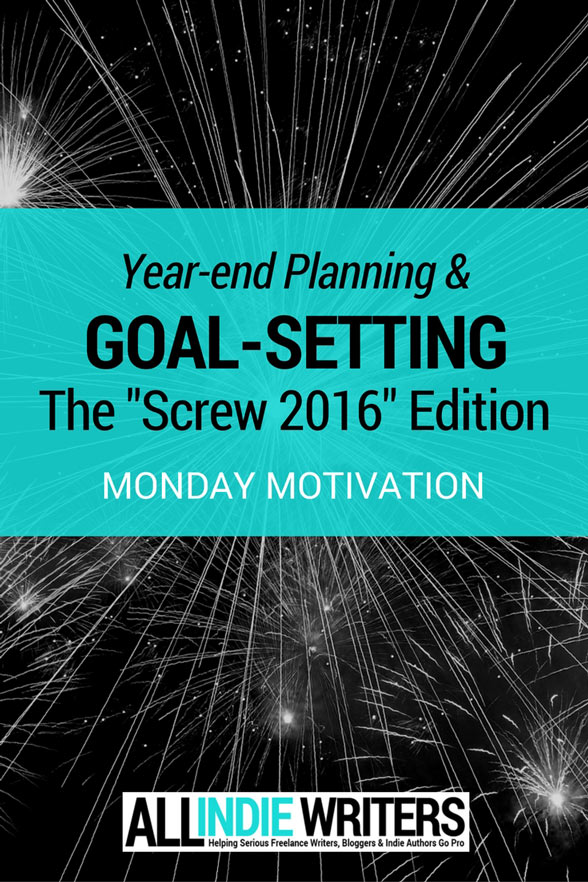 Yes. Past tense. I refuse to let it take, destroy, or corrupt anything else I hold dear. I declare 2016 officially over. I've decided to spend the next several weeks living in some limbo-like state free from the confines of time and space. You are welcome to join me.

Because I've decided to leave this wretched year behind me, I kicked off this week working on my year-end evaluation and 2017 goal list a bit early. Get it over and done with so I can forget this year ever happened a little sooner than expected. And you should consider doing the same.

No, hear me out. Now is actually the perfect time to reflect and make plans for your writing or publishing business (or life).

Planning for the New Year: Why Now?

Look. Once the New Year rolls around, do you really want to spend it looking back? Or do you want to be ready to hit the ground running come January 2nd (first weekday of 2017)?

Doing your year-end evaluation now means you won't have to worry about it over the holidays (whichever you happen to celebrate between the U.S. Thanksgiving and New Year's Day).

Here's the real reason you should consider some early planning though: you still have time to fix shit.

Wait until mid to late-December to look back on what you've done, and it's too late.

You heard me. Too. Damn. Late.

Take a look at the goals you set early this year and see if any of them are still in reach if you get your ass in gear now.

I don't know how much time you have left this year, but I have five working weeks followed by around two-and-a-half "leave me the hell alone" weeks, and I don't plan to waste them.

If you want next year to be any better than this one, a good place to start is conducting a year-end evaluation. Here's a simplified explanation of how that's done:

That new list is the start of your 2017 plan. But we're not done looking back yet.

At this point you'll have a decent list of goals to get you started in the New Year. But don't stop there. Maybe some of the goals you accomplished are ones you want to repeat. Also think about new goals you can add.

Then trim those suckers down a bit.

I'm actually a fan of long to-do lists. I break things down into micro-tasks (like my 5-minute lists) so I never have an excuse not to make progress. And I always set more (and bigger) goals than I know I can realistically accomplish so it constantly pushes me to go further than I thought I could (though I royally screwed that plan up this year).

It really is that easy. Look at what you've done this year. Clean up any lingering tasks. Vow to do better with the rest of your goals next year (we're all allowed to lie to ourselves just a smidge). Add anything else you want to accomplish. And make sure you're not overdoing it.

Oh boy. Where do I even begin with this year's final check-in? Can we just say "I blew it" and leave it at that? Didn't think so.

What the Hell Happened?

I'm not getting into the whole "here's what I was supposed to do and failed miserably at accomplishing" thing. The list would be a bit crazy. And not much of it got accomplished.

This year kind of went to hell for me in February. Yes, that early.

All that said, 2016 was also a virtual shit storm:

And that's not even including the most personal BS from this year. And I'm sure I'm forgetting a few dozen other awful things that happened (not even counting the crazy lineup of celebrity deaths or other people's far more important problems like, you know, the Syrian refugee crisis).

Normally I make fairly detailed plans for each new year. This year, I'm keeping it vague (for fear that if I tell 2016 my plans, it may plant its seeds of destruction before I even get started). So here's what I'm hoping to do in 2017:

And that's about it business-wise. I'm going back to my roots, doing what works for me, and screw all the "scale back; you're spreading yourself too thin" garbage. I'm at my best when I do more than people think I can (including me).

I have plenty of personal goals as well. I won't get into the full list here (again, I don't trust this year not to sabotage me). But there will be some financial changes, some health-related changes, some significant political activism and campaign management (alongside my sis: putting our PR, social media, campaigning, nonprofit, media, and fundraising experience -- and our big mouths -- to good use), some changes around home, and some more "me" things (because I damn well deserve it after this year).

The one I will share specifics about is my bigger "reward" goal that I suggested you come up with. For me, that reward will (hopefully) involve making time to get to the UK finally (for a week or two; not sure yet). I planned to go this fall to be in London on Guy Fawke's and then visit some schools further north. But then, well, Brexit threw a wrench into those plans with all of its uncertainty.

That means the school thing is off the table for the next year at least. But I'd still like to visit. So it will be a "for the hell of it" trip, and I will go meet with the wonderful Philippa Willitts (who will be a guest on the podcast here later this month), and we shall finally go enjoy a cup of Earl Grey together (because I'm totally the type of person who would cross an ocean for a good cup of tea and a bit of gossip).

Going Back to Boring

In the meantime, there are still seven weeks left before I get to start fresh in a new year (I take that new year "starting over" thing very seriously). So I'm making small changes now on both a personal and professional level. And that largely involves being insanely boring.

What I mean by that is that I'm working on getting back to a regular routine -- mostly my old routine that left me kicking ass in pretty much every area of my life. That means I keep the same schedule almost every day, I eat and drink the same things almost every day, I have a strict workout schedule, and if that alone doesn't work, then I break out the daily Pomodoros and schedule my day almost down to the minute.

So, beginning this week (today actually), this is pretty much going to be my life, minus the holidays and occasional day trips:

That's basically my work day. Fairly simple. Extremely boring. Very routine. But boring is good sometimes because it means I don't have to think about every little thing -- I can just do.

My work day ends at lunch, and is only Monday - Thursday, so I have plenty of free time accounted for (which is so important; if you don't have that, consider making it one of your 2017 goals).

That free time will mostly go towards catching up on more movies (particularly horror), photography, watching soccer, and occasionally even writing more just because I feel like it. And there will be occasional exceptions like a day trip tomorrow and another to NYC in a few weeks to visit the German consulate and see the tree at Rockefeller once it's lit.

I'll also be going back to my favorite way to end each day -- more yoga and / or meditation (normally on a "when I need it basis," but after this last month or so, I need it), then reading for an hour or two before I sleep. I feel like I've gotten dreadfully behind on reading in the past few months due to other distractions. My to-be-read pile is calling my name.

I'm going to see how well I stick to the plan this week.

So that's it -- my day-to-day plan to somehow get me through the end of this miserable year. And my plan for 2017 is pretty simple: go back to what I rocked for years, and to hell with all the changes that have held me back. I'll be doing things my way again.

You should do the same. Know what works for you, even if it's not the way other people tell you that you should be working. Know where you want to go and how to get there.

Then hunker down, do the work, and treat yourself to an immense pile of chocolate this time next year as you review your 2017 goal list and realize you've knocked every damn one of them out. So get planning. There's no time like the present.