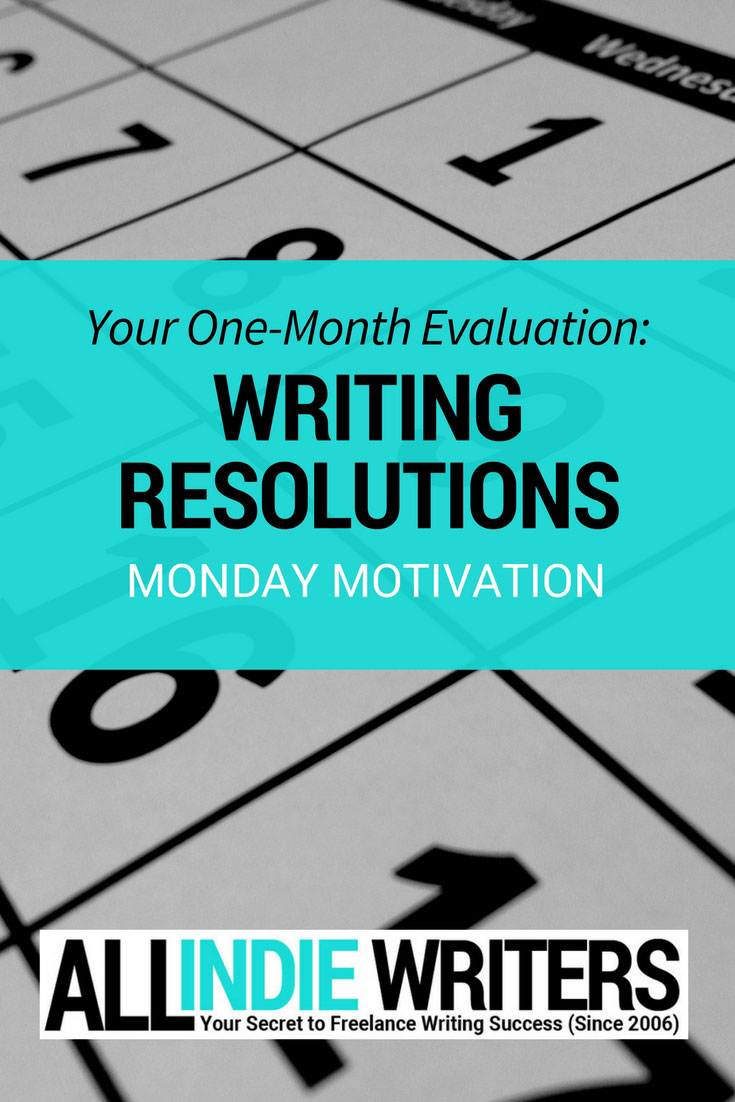 If you set yearly writing goals or new year's resolutions last month, how's that working out for you?

Whether you've made a lot of progress or you've already forgotten about them, now is a great time to give your plans a second look. So go dig up your list. I'll wait...

Why Evaluate Writing Goals in February?

Normally I'd tell you to focus on quarterly check-ins for big yearly goals. But February is the exception.

I'm a bit biased towards February. My birthday falls early in the month, so for me it really is like having a second start, and it often affects me even more than the start of a new year.

Having this second chance to start over motivates me even more.

If I messed up once and got off track, I sure as heck don't want to do it again. Some of the biggest things I've done in my life have been a result of that second surge of ambition and excitement that comes each February.

You can find a similar benefit by doing a simple evaluation.

Here's an easy exercise you can do to try and harness some of your new year excitement again before it fades away:

How do you know where to group those tasks?

These are goals, resolutions, or tasks that you aren't technically behind on. You've planned for them to come later in the year.

For example, my list of resolutions almost always includes at least  a couple of website overhauls or new site launches.

That doesn't mean I have to start working on each of those projects in January. I may have scheduled one for spring and another for a fall release. So not making progress by February doesn't mean I'm behind (yet).

Tasks in this group deserve closer inspection during the quarterly evaluation where you're actually supposed to be working on them. For now, set these aside.

Behind Where I Want to Be

These are goals you should have started working towards earlier, but you're either behind or you haven't started yet.

For example, let's say your resolution was to publish a nonfiction book related to your blog's niche. Unless you've mapped out a specific schedule that doesn't begin until later in the year, you probably should have made some progress on this project while you had that new year excitement behind you -- even if that was just creating an outline.

These  goals are salvageable.

Here's where to spend most of your time. Remind yourself why you set these goals in the first place.

There's always an end game. Focus on that, and put together a plan to get yourself back on track.

What the Hell was I Thinking?

If you find yourself wondering why you ever added a goal or resolution to your list, it's time to reconsider it.

Will you actually have time to do that? Do you still want to do that? Does that goal still fit in your larger plan or business model?

If the answer to any of those questions is "no," scrap it. Focus your energy on the things you can, and really want to, do.

I didn't go into a lot of details about my resolutions when I shared them. And I'll keep it equally vague here (will share a bit more in the first quarterly evaluation perhaps). But it's been a mixed bag.

Luckily, I don't have anything in the "what the hell was I thinking?" group this time around. (I usually do.)

I've made some progress in that I'm getting my own blogs back in order. That was a big part of my re-emphasis on my three-prong approach to my business, and also my goal of reviving my "Big 3" blogs.

That said, progress on two of those three blogs has been slower than I'd like.

I hoped to start blogging at NakedPR.com again right away in January. But I'm stuck deciding on a direction. This goes back to me re-thinking options related to going back to school and wanting this blog to fit into those plans. I'm torn between two paths right now, but should figure it out soon enough.

I haven't started the content overhaul yet on BizAmmo.com, which I also hoped to work on last month. But that's an issue of the content audit taking longer than expected. Still working on it, so it's still OK in my book.

Then there's the indie publishing side of that three-prong business approach. That's where I'm most behind. I have a nearly-finished short e-book that's been waiting on me to get back to it for months. And there's no excuse for that not being released in January. I might manage a February launch, but I don't like already being behind on my publishing schedule. That's where I need to drum up some new excitement.

Really, it all comes down to priorities: What do you want? And what's the best use of your time to get you there?

Even if you've already gotten behind on your writing goals, it's not too late to fix things (or even change your plans if they're not working for you).

Don't wait until months have gone by. Let February be your second chance for a fresh start.

How are your writing resolutions and 2017 goals shaping up so far? I'd love to hear about your progress in the comments.