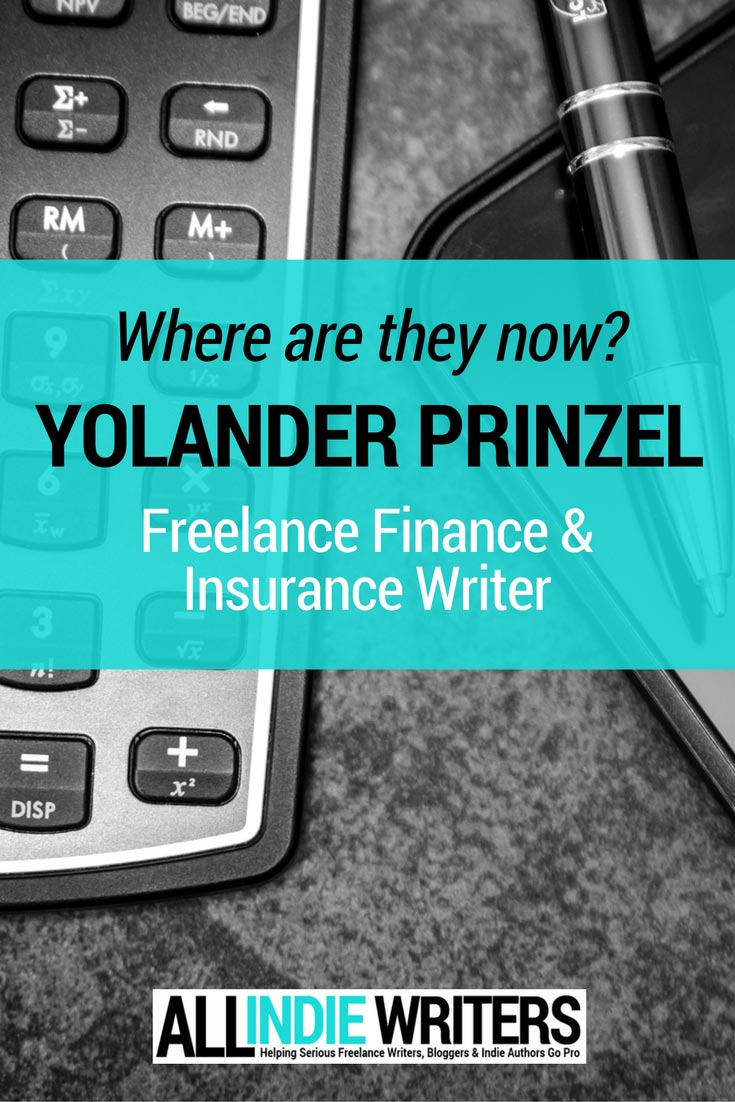 Earlier this month, we caught up with two writers who used to be regular contributors to this blog -- LaToya Irby and Rebecca Garland. Today an old reader favorite makes her return.

Yolander (Yo) Prinzel is a freelance finance and insurance writer who specializes in ghostwriting now. She's also one of my "go-to gals," meaning she puts up with more of my rants and ridiculousness than anyone should ever be subjected to.

And she's one of very few fellow writers who ever gets to see my rough work, because I know I can always trust her for honest feedback, whether I like it or not. Princess Jones and I actually chatted about Yo's writing critique awesomeness in a podcast episode a while back, and Yo stopped by for a follow-up episode on critiquing the work of fellow writers.

While she's covered a wide variety of topics here, from ghostwriting to the freelance writing community itself, Yo was probably best known here for her posts on content mills.

She not only helped newer freelancers see there were better options out there, but she actually put content mills to the test and reported back on their potential for you. She even put her insurance industry background to use to dissect mill insurance offerings when they started using them as a marketing ploy to suck in new writers without increasing pay.

Yo's been keeping quite busy in recent years between freelancing and indie publishing (I've read some of her fiction -- she's hilarious, which shouldn't be a surprise). Let's see what she's been up to:

I know you shared some of this in our recent podcast round table chat, but humor us anyway. Tell us about your specialty in finance and insurance writing. When did you start specializing in that area, and how did you get into it?

I think I started focusing in on it as a specialty in 2009ish. My entire corporate career revolved around finance and insurance—from being a life insurance underwriter to a life, health and variable annuity agent, running a specialty agency then becoming a trade service specialist with Raymond James.

When I first started writing on the side, I was so stunned to discover this as a viable career that I didn’t even think about specializing or merging my professional career with what was then my side gig. But when I decided to pursue writing seriously, I realized that I needed a specialty and since I’d already been producing written and web content in the financial industry for a decade, I decided to stick with that.

What have you been up to since leaving All Freelance Writing?

I enjoyed a pretty profitable fiction self-publishing career for a number of years and even though my personal production has all but stopped, I still get royalties every month without any advertising.

What's the biggest change you've seen in the freelance writing industry since your days writing for this blog?

Writers, especially fiction writers, are still getting screwed on sites like eLance/oDesk/Upwork and Warrior Forum, but at least the content mills are only limping around on their dry-rotted legs.

With the explosion of self-publishing and eReaders, ghostwriting is becoming more prevalent, but in a bad sort of way. Writers are charging less than $1,000 to write entire novels, and they're encouraging others to do the same.

I’ve been involved in many conversations with writers in which I’ve tried to explain that getting 5-figures for ghostwriting a book is completely reasonable and achievable, but newer writers tend to argue against that the same way people used to argue with us about content mill rates.

What's the biggest change you've seen in your own freelance writing career in that time?

Not only do they want expertise for the industry you’re writing in, but they also want experts in self-publishing. Having published more than 60 of my own books and a couple dozen for clients, I’m in a unique position.

You used to cover a pretty broad range of topics for this blog, but one of your biggest was content mills. If you could give new freelancers one tip related to content mill work and finding better alternatives, what would you tell them?

Listen, money is money. I don’t want to shame anyone who earns money and feeds their family with content mill work. I get it—I really do.

The thing is, rather than being defensive when people tell you there’s a better way, try to be open and see what advice you can take from them in order to increase your own rates and diversify your client pool.

I’m not saying everyone has the same potential, the same skill, or the same access, but you can probably take some part of the advice and make it work for you.

A big "thank you!" to LaToya, Rebecca, and Yo for taking the time to catch up. One more former contributor will be stopping by in coming weeks, so keep an eye out for my interview with Chris Bibey on his specialty as a corporate blogger.