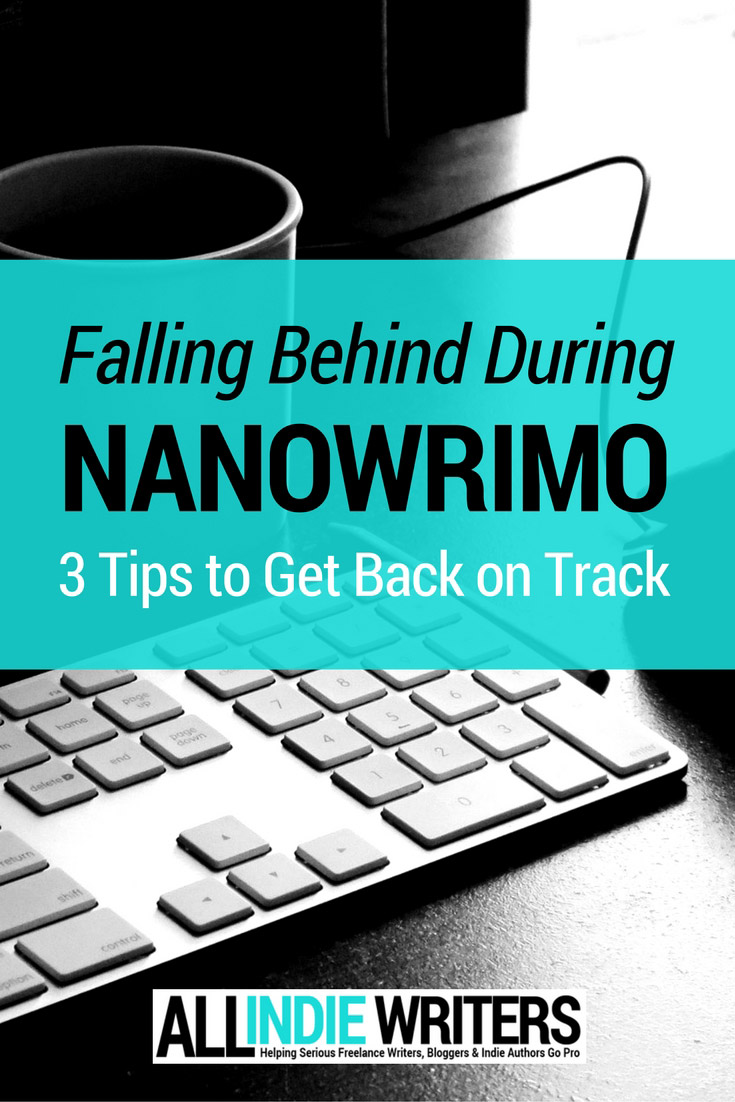 NaNoWriMo has barely started, and I'm already behind this year. I changed my novel idea at the last minute (I believe around 10:00 p.m. the night before). I still haven't finished the scene-by-scene outline, though I hope to by tomorrow morning. And it's now November 3rd and I haven't even begun drafting my novel yet.

That seems like a cause for concern, right? But I'm not worried. At least not yet.

Every year that I've done NaNoWriMo -- the popular month-long novel writing challenge for those who might be unfamiliar with it -- I've accounted for several days off.

That normally involves taking off Sundays and the four days around the Thanksgiving holiday. And in three years, I've never had a problem hitting the 50k word target. So things will be OK.

Still, the slow start means I have some time to make up for.

I know exactly how I'm going to do it -- the same way I always get back on track when I feel like I'm getting behind during NaNoWriMo. And today I'm going to share some of those "tricks" with you.

3 Ways to Get Back on Track During NaNoWriMo

If your NaNoWriMo word count isn't quite as high as you'd like it to be, these tips might help you catch up:

The Pomodoro Technique is my fallback tool when I'm feeling behind or am pressed for time on pretty much anything, but especially my writing.

The idea is simple: you focus intensely on the project-at-hand for a short period of time, and you take short breaks between each burst of work (in this case a writing sprint). My Pomodoro days are broken up like this, in a repeating pattern:

There are plenty of Pomodoro apps you can download for your phone or tablet (my favorite Android app for this is Pomodoro Tracker). Or you can use a web-based timer. My favorite is E.ggTimer.com.

Even if you're not in the mood to write, or you're otherwise struggling, you can probably find 25 minutes. This kind of timed writing forces you to make the most of it.

Go beyond using the Pomodoro Technique for writing sprints. Turn it into a challenge or contest by comparing your word count from one Pomodoro to the next (or comparing your progress to a fellow writer's). Try to best each other, or best your previous record during each Pomodoro.

No matter how fast you type, you can probably write faster by simply talking your way through your story. This is where voice-to-text technology comes in handy.

I like Google's voice-to-text capability, and often use it to write on my tablet, or even my phone, through Google Docs. (I prefer Scrivener for books, but Google Docs is what I use for any voice-writing; you can always transfer it to Scrivener or other software later.)

My favorite part of voice-to-text writing is how quickly the words come. The biggest downside is remembering to speak punctuation (hate that). If you've never tried this before, it might take some time to adapt before you're writing at lightning speeds, but you'll get there.

For the traditionalists in the group, you can also use software like Dragon, Naturally Speaking. (I have, and occasionally use, this too. But I've gotten better results with Google's voice-to-text engine.)

If you like the idea of "speaking" your book as if you're telling a story to someone, but you can't stand worrying about formatting while speaking, simply record yourself. You can either then feed your audio into one of these voice-to-text tools when you have time to deal with edits and formatting, or you can hire someone to transcribe your recording to a text document for you.

You're a writer. So use that imagination to create a bit of urgency and have some fun in the process.

When you need to get caught up on your NaNoWriMo word count, try mind games. Convince yourself that something else depends on you hitting the day's goal.

This takes me back to a simple kid's game, where we had to get around without touching the floor because we'd pretend that floor was covered in lava.

Now, I have a little ottoman tucked under my desk for one of my cats. So when I need to get in that "ass in chair" frame of mind, I tuck my feet up on that ottoman and vow not to let them touch the floor again until I meet the goal for that writing session.

(I don't actually imagine lava on the floor, but it's the same idea, and you certainly could.)

This tactic works well for me even though it's my least-used of these three. Whether or not it works for you will depend on the strength of your imagination and the scenarios you come up with.

Rather than simply telling yourself "if I reach XXXX words by Y o'clock, something good will happen," consider making it a reality with a rewards system. Give yourself your favorite dessert. Reward yourself with a trip to the theater to see a new movie you're interested in. Give yourself a day off if you use the tactic to get ahead rather than catch up. Just choose something you'll want enough that it will actually motivate you.

Those are just three examples of things you can do to catch up if you're falling behind during NaNoWriMo. I know you probably have other ideas that have helped you get back on track. So why not leave a comment below and help your fellow writers out? When you need to write a little more than usual, how do you motivate yourself to do it?

2 thoughts on “Falling Behind During NaNoWriMo? 3 Tips to Get You Back on Track”