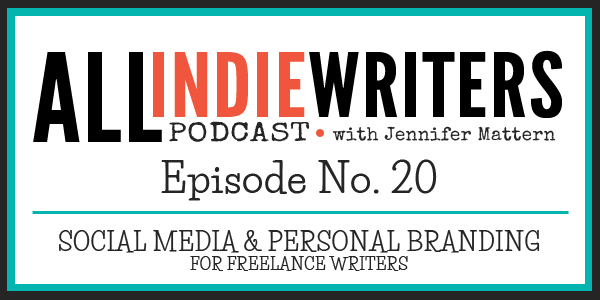 Last week's podcast is now up. If you aren't subscribed yet, you can listen from the show notes page (or directly via SoundCloud).

In this episode I pick up on my conversation with Dann Alexander, having answered another of his questions in Episode 18. This time Dann wanted some social media dos and don'ts when it comes to building your personal brand as a freelance writer.

Dann also wanted to know if it's possible to build your personal brand without Facebook (hint: it is). So that's what you'll get here -- general social media tips from being where your clients are (as opposed to colleagues) to the number one thing you need to keep in mind when building a personal brand using social networks. Then I provide a few tips on using networks other than Facebook -- specifically Twitter, Pinterest, Google+, and LinkedIn.

This week's scheduled podcast will feature guest co-host, Yolander Prinzel. Yo is the last of my "go-to gals" (in addition to Lori Widmer and Cathy Miller) to make an appearance. She's also a former regular contributor to this blog from its All Freelance Writing days. So I'm quite excited to have her. We're going to talk about critiquing, editing, and beta reading work for other writers.

There's one wee catch though. We recorded about three hours of audio last week. Or so we thought. Unfortunately the app used to record the podcast chats failed miserably and we weren't left with anything but our private opening chat And that majorly sucks because it would have made for a great show.

More importantly, if we try to re-record that same show it's going to come across as rehearsed. We had some awesome moments looking back at critiquing and beta reading projects for each other where we'd forgotten things, from me forgetting a fight we had over negative book reviews to Yo forgetting calling one of my characters a bitch in her feedback.

We'll likely still talk about these things, but obviously it won't have the same effect now because we won't be hitting each other while one of us is blind to these things. But we'll do our best and hopefully come up with other examples to keep the conversation fresh. Any way you cut it, when you get Yolander and me together, it's going to get a little bit rowdy (Yo and Princess on the same episode would be beyond amazing -- I'll have to set that up). So if you're sensitive to profanity, it's probably going to be an episode you'll want to skip.

Here's the thing. The episode this week might be a little bit late. We'll be recording late in the week, and editing time on these co-hosted shows is rather unpredictable depending on how crazy we get (usually very). So you may or may not have a new episode on Friday. If it's late but it looks like I'll be able to get it up over the weekend, that will be the plan. If not, then we'll skip a week and put it up the following Friday.

In the meantime, check out this week's show so you can avoid making social media mistakes that could hurt your personal brand.