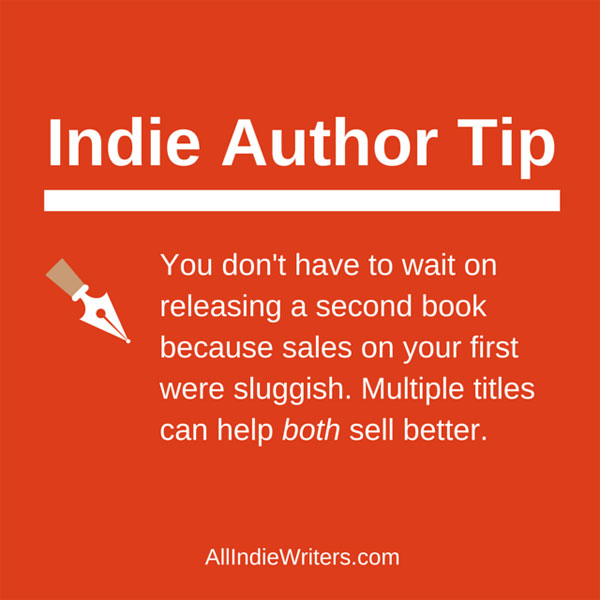 Last week, a question from Sunayna Prasad came in about building a fan base and how it affects series publishing. Basically, she wanted to know if she should publish the second book in her new series right away, or if she should wait until she has more fans or readers of the first.

"I am writing a sequel to my published book. It didn't sell a lot, but it got a lot of positive reviews, all from strangers. How many fans should I have (whether they bought the book or I gave it away for free) before I publish my sequel. I sold somewhere around 53 copies since a year and a half ago. My goal is to have at least 800 fans before publishing my sequel. The title includes the phrase, book 1, so readers already know that there will be another installment. But is 800 too many for the number of books I have sold?"

How Many Fans Before Publishing a Sequel?

Here's a great thing about being an indie author: you don't have to wait around for stats on Book One before publishing Book Two.

Now don't get me wrong. Those stats are important. And you should never neglect market research. But when it comes to writing a series, there's another marketing consideration. Your second book has the potential to help you sell your first.

If you're seeing sluggish sales numbers like the ones mentioned here, it could be for a number of reasons. For example, it might be a result of:

But when you have a book out and you note that it's "Book 1" in a series, it's reasonable to assume new readers are going to look up other books in your series before buying. It clues them in to what they can expect. And finding that you haven't actually released anything else yet can be a turn-off.

Personally I wouldn't add "Book 1" until at least one other book in the series was released, in your next edition or a cover update. Avoid setting readers up for disappointment whenever possible.

By releasing your second book quickly, you have a chance to reach die-hard series readers who only take up a new author's work if they know they'll have another book to move on to. This is why some indie authors don't even release their first books until they have a second, or even a third, ready for release at the same time.

So Sunayna, if your second book is almost ready and you want to launch it sooner rather than later, go ahead and do that. While I can't speak to the book itself because I haven't read it (and I don't know how big your audience is compared to buyers because you didn't mention how many free copies you gave away), I can tell you that your second book can be a great marketing tool in building a bigger fan base for the first.

If you decide that you would prefer to wait, that's an option too. Just don't let waiting turn into a waste of time. Take that time before your next launch to do some serious digging. Find out why people aren't buying more. Look for ways to improve your book marketing plan. Then you'll be in a much better position to promote your new book and increase sales on your first.

Now let's take it to the community. Do you publish multiple books at once to capitalize on the instant gratification readers often want? Or did you wait a while between your first and second books in a series? How did it work out for you, and if you had to do it again would you do anything differently? Tell me your thoughts in the comments.

5 thoughts on “Reader Question: When Should Indie Authors Publish a Second Book?”