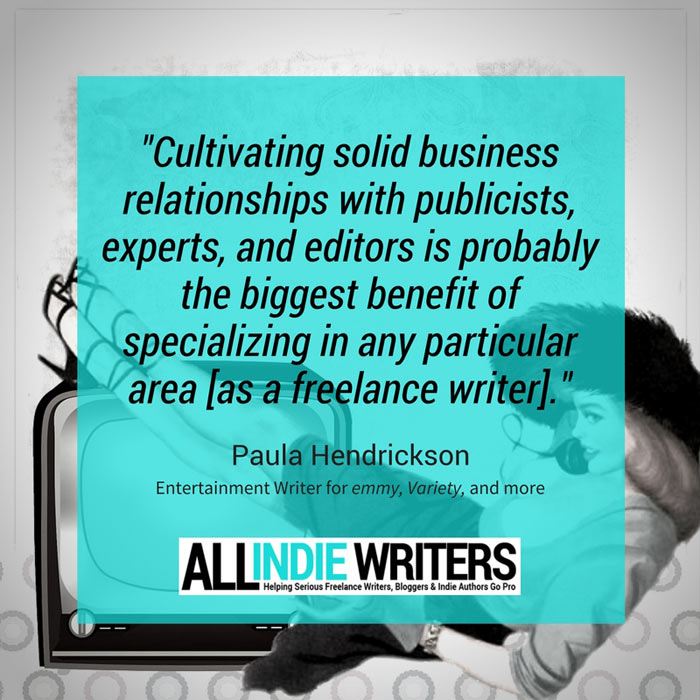 Freelance writers would be wise to specialize. I've given this advice for years, and for good reason. Whether you choose to specialize in a niche or industry (or even type of writing or type of client base), you'll generally earn more as a specialist. But there are other benefits too, as today's guest points out.

In my interview series talking to freelance writers about their specialties, I've mostly talked to people who have been specializing for a few years. But with the focus this month on All Freelance Writing' 10-year anniversary and taking a look back on the freelance writing industry and how it's changing, I thought it was about time to bring in a veteran.

So today let's meet Paula Hendrickson, a freelance writer with 20 years of experience as an entertainment writer covering the television industry for publications such as emmy and Variety.

In our interview, Paula talks about how she "fell into" specializing in the entertainment industry, how she uses "sub-specialties," what changes she's noticed in entertainment writing in recent years, and more.

Tell us a bit about your freelance writing specialty. How did you get involved in entertainment journalism?

The truth is that I fell into entertainment journalism—if you want to call it that— as a fluke. I’d been writing about sales, marketing, and promotional topics for a couple of national business trades. In researching one of those articles I learned that the long-running (even then!) PBS series, This Old House, was about to become the first PBS show to be sold into off-net syndication. I looked around for TV-related markets and discovered emmy, which is the official magazine of the Television Academy. What I liked about the magazine was that it was about the business and creative side of television, not the gossipy showbiz kinds of stories you read in consumer magazines.

I summoned up my courage, found some old Advertising Age clips that dealt with TV Upfronts—where networks, hoping to secure deals to sell as much commercial time as possible before the new season starts, tout their upcoming shows to advertisers —to show I had some industry contacts, and sent a query. By mail. I can’t believe it, but this was 20 years ago. I was still quite green, perhaps too naive to realize I was approaching one of the top TV trade magazines. As with most queries, I sent it and tried to put it out of my mind.

Before long the editor called and assigned the story.  It ran nearly verbatim in emmy’s October 1996 issue and I’ve been writing for them ever since. Once I had some good clips with emmy it wasn’t too difficult to branch out to additional TV-centric publications.

Cultivating solid business relationships with publicists, experts, and editors is probably the biggest benefit of specializing in any particular area. After a while a symbiotic bond starts to develop—you know who to reach out to for specific types of information and where to pitch certain ideas, while sources send you leads and editors assign articles you didn’t even pitch.

That said, I don’t only write about television. Focusing on just one subject would get really boring really fast. And I write more than just articles. Having several sub-specialties helps balance my workload.

Some writers who cover television do a lot of set visits and attend press junkets and parties. Being located in the Midwest, I’ve only gone on location twice: behind the scenes at Food Network in New York, and behind the scenes of Harpo Studios when it was still in Chicago. Meeting and interviewing Oprah Winfrey was a highlight of my career, especially since it was exclusively for emmy, not part of a press tour. A lot of people assume interviewing celebrities would be a perk, but honestly, the thing I love most is speaking with the producers, writers, directors, special effects designers…the off-camera talent who bring television to life.  Nothing against actors and on-air folks—they can be fun to interview, too. I just really enjoy shining a light on the unsung people who work so hard to make it all happen.

What's your biggest marketing tactic? Do you focus mostly on seeking new clients directly, maintaining existing relationships, seeking referrals, or something else?

Maintaining existing relationships is important, especially in an industry where there’s a lot of turnover. Social media makes it easier to stay in touch and keep tabs on what other people are up to, which makes it easier to drop a casual note or comment. “Love the Instagram pic of the cookies you baked. Yum! Care to share the recipe?” (Okay, I’ve never said exactly that, but if I saw such a photo I probably would.)

After a while you wind up on a lot of mailing lists. Even if I have no use for a lead in a broadcast email, every so often I’ll reply and tell the publicist what type of sources I’m looking for or which issues I’m rounding up query ideas for that I can send my editors.

I’ve never made a habit of blatantly asked for referrals. Maybe that’s something I should try.

You've been in the freelance game for quite some time. Tell us a little bit about your history and what it was like getting started when you did. What's changed the most in the last 5-10 years in the freelance markets you work with?

I started freelancing before I was even out of college. I actually sent my first query letters while still in high school. After college my dad, who was a freelance graphic artist and cartoonist, told me to take two years to see if I could build a freelance business. It wasn’t easy—and sometimes it still isn’t—but I did it. That was back in the pre-internet days (well, the internet existed, but most publications I pitched to still didn’t have websites or email so I spent a small fortune on SASEs and professional letterhead). Articles were filed one of three ways: by fax, mailing in a hard copy, or mailing in a floppy disk. Research was so much harder back then. I couldn’t go to a website and track down a publicist’s contact information. In retrospect I wonder how I got anything done.

The biggest change I’ve noticed in entertainment writing is there’s a plethora of unpaid (or underpaid) bloggers who are trying to break in. Some are good enough to do it. Others like to claim they have “exclusive interviews” with celebrities when the interviews were part of a junket, a Q&A, or one of those calls with dozens of reporters all on the same line. There’s nothing exclusive about that. There’s also nothing wrong with those types of interviews when you can’t otherwise get access to those people. Bloggers who write well, don’t make false claims, and do the legwork have an easier path to breaking into entertainment writing than my contemporaries and I had.

If you could offer newer freelance writers one piece of advice related to choosing a specialty, getting started, or finding clients, what would you tell them?

Just one piece? Okay: Even if you specialize in one subject matter, always keep an eye out for opportunities to cross into other areas—you never know where that might lead you.

If you have an interesting freelance writing specialty and you'd like me to consider featuring your story here on the blog, tell me about it in the comments or contact me to chat about it.

5 thoughts on “Paula Hendrickson on Choosing Her Freelance Writing Specialty”