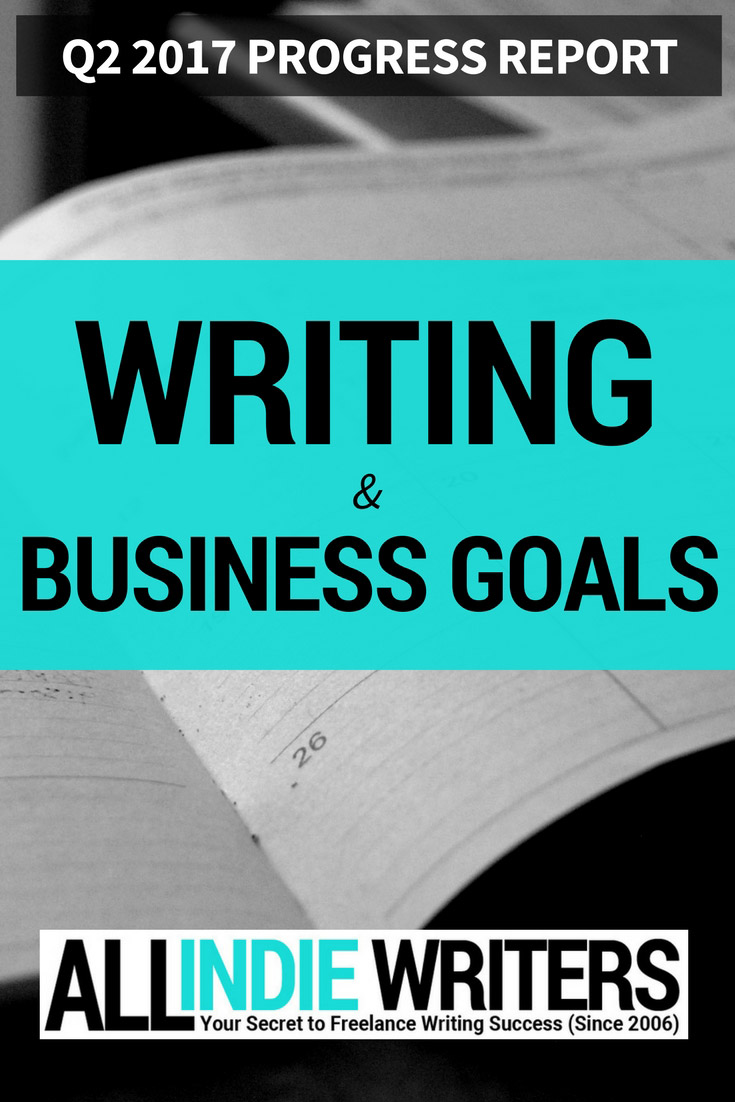 Can you believe we're already in the second quarter of the year? A colleague mentioned it yesterday, and I hadn't realized how much time had gotten away from me.

What that means is it's time for a check-in on writing and business goals for the year. See what's working. Figure out what's not. And see where tweaking your original plans might help you get ahead.

How are your writing goals shaping up?

If you set resolutions for your writing business at the start of the year, go ahead and pull those out.

Look them over. And ask yourself the same kinds of questions we talked about after our one-month check-ins:

The idea is to stop doing anything that isn't getting you closer to your goals, and do more of the things that are.

That could mean changing up your marketing strategy to land freelance writing clients -- perhaps moving from regular pitching to more of a query-free freelancing approach like mine where you rely on PR and inbound marketing.

Maybe that pitching is working for you though. If so, you might spend less time on other promotional tactics -- such as social media -- and put even more time into sending queries and LOIs.

It could mean giving up on one site you were building (which wasn't quite cutting it income-wise) and instead launching a blog around a topic you're passionate about.

Or perhaps you've seen a few more leads from search engines recently, so you decide you want to make SEO more of a priority moving forward.

Your writing goals might not change at all from one quarter to another. Or they might change drastically.

This quarter I fall somewhere in the middle.

I mentioned when originally setting my goals for 2017 that last year was kind of a garbage year for me. If something could go wrong, it did.

That said, I'm a big believer in resets. When things get bad enough, I plow through as best I can. But eventually I get to a point where I just say "to hell with this already; I'm done, and it's time for things -- sometimes everything -- to change."

That's sort of the way I start every new year.

It's a clean slate. I don't have to keep doing things the way I did them previously.

That's why my first quarter of each year is often more productive than the rest of it combined. It's that reset phase. I have the energy, and the excitement, to do more than pretty much any other time of the year.

Things didn't work out that way this time.

I hadn't quite scrubbed off the stink of 2016 yet. The first quarter was still pretty bad personally, though a little better. And, while I was working my ass off, it kind of felt like not much was getting done.

The thing is, my year didn't go downhill at the start of last year. That happened in early April. So now that it's officially a year since all hell broke loose in my life, I've decided it's a good time to pound my fist down on that "reset" button and just start fresh. And this time it's going to be better, even if out of nothing more than sheer stubbornness.

I mentioned that I'd been working hard in the first quarter but didn't have a lot to show for it. That was largely because I've been working on the back-end of websites as part of larger plans. For example, big goals for this year were to:

On that last point, it's been a total friggin' failure. But that's okay. I'll get to that...

It's the first of those goals that's taken so much time with so little to show for it. Or that's what I thought at least. When I started listing the progress, honestly, I don't feel too badly about it.

I haven't done much with NakedPR.com yet (one of those "Big 3" blogs I'm reviving), even though email subscribers are steadily growing. I let myself get stuck on where I wanted to take it... more business PR and social media again versus taking on the political side of the communications industry. Then again, I've always done whatever the hell I please there. So perhaps the answer is to do both.

Other than that, I've just kind of been quietly doing what I do -- client projects, blogging, reading, writing.

I'm getting tired of being quiet.

It's time for bigger changes.

And it's time for more public changes at that. So I'm hitting that reset button on my goals, my business, my attitude, and my ambition.

All Indie Writers Must Die

All Indie Writers, the site, isn't going anywhere. But it's time for this brand to be killed off.

I've mentioned before on the podcast that the big site merger, where I merged three writing blogs to create All Indie Writers in 2013, was one of the biggest business mistakes I've ever made. And I think I've given it more than enough time.

Here's the thing. After the brand change and merger, and all the technical problems that came with them, this site started to feel like a lead weight holding me down. It wasn't nearly as much fun anymore. And even though I'd work myself ragged on it, from the podcasts to deeper blog content to all the back-end work, I just didn't care as much about the site itself.

Not as much as I did about the main site from that merger at least: All Freelance Writing. And I've finally made a decision:

It's time to go home.

Not long ago, I announced the focus of All Indie Writers would no longer be three-fold. It would focus predominantly around freelance writing. While I'll still talk about indie publishing and blogging in that context (in the sense of blogging-as-marketing, indie publishing for thought leadership purposes, and occasionally talking about both as supplemental income streams), they're taking a back seat.

That change was already made. And after a few more minor structural changes (so there aren't any redirection problems with the brand reversion), we're going back to the old All Freelance Writing name. It simply makes sense.

I'll tell you more about that as the time comes (while I'd like to finish the changeover by the end of April, it might be in the first half of May).

And as for the indie publishing side and that push into short fiction and poetry? Yeah, I just haven't paid much mind to it.

I'm taking National Poetry Month this month to re-focus my more creative work around poetry. And by month's end, I'll send off my first pitch in that area for the year. (My goal is to write 4-6 poems and have at least one pitch-ready this month.) I also have a couple of publications I plan to pitch short fiction to. I'll likely start with flash fiction and microfiction because I have some things almost ready to go already.

And that's where things stand at the start of the second quarter.

I'm not thrilled with what feels like a lack of progress. But I do know how much was done behind-the-scenes. So I'm going to change gears as far as planning and preparation, and move more attention to the public face of my business.

I'm going to take that foundation I've been working on, and I'm going to build on it. It's been a while since I've gotten out of my own way and let myself do that. And I see no reason why Q2 of 2017 can't be the insanely productive Q1 of any other year.

No matter how your start to this year went, I hope you can say the same about the next few months. Keep working towards those writing goals. Set new ones. Grow your business. And keep growing yourself. As always, I'll see you again on the other side -- hopefully with more to show for it.